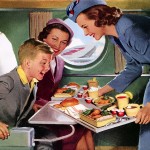 .  It’s like a cattle drive now—herded on, stuffed elbow-to-elbow, herded off—not the civilized well-dressed mode of transport it used to be.  But that’s not the point here, at least not the whole point.  When you are packed that tightly, you can do one of two things: shut yourself off completely with headphones, a book or movie; or you can pay intense attention to the people around you. I often choose the latter.

Last night, on one of my frequent trips on the shuttle back and forth to DC, I focused on a woman in front of me, across the aisle to the right. She appeared to be in her 30s, but was wearing lots of stuff ganged up on her arms–Livestrong band, bracelets, wrap-around rawhide–that seemed inappropriate for someone her age (too judgmental?) The flight attendant came over to her early in the flight, confirmed her name, and went into a detailed explanation of the shuttle’s boarding process. US Airways makes numerous announcements at the gate that they board by row, not by zone and not by dividend mile status—just rows, starting from the rear. It became clear that the woman had made some kind of complaint about it. The flight attendant told the passenger “It’s because everyone on the shuttle is a frequent flyer.”

The woman was visibly unhappy with the explanation, slamming the pages of her magazine (‘Self’) and grumbling audibly even after the flight attendant had walked away. How self-absorbed do you have to be, even though you are seated in row 5—you’ll be one of the first ones off the plane—to complain that the flight was not boarded by zones? As self-absorbed, I guess, as the guy in the middle seat on the way down to DC who leaned—LEANED, head on bended elbow—on our shared armrest the entire trip. DUDE, get off of me! I was hanging so far out into the aisle I almost got nailed by the beverage cart!

On another recent flight, as we were boarding, crossing from the jetway onto the plane, the man in front of me leaned over, looked closely at the window to the right, and then started feeling the seal around it. Made me a little bit uneasy. When I sat down in the first row of first class (free upgrades! Thanks, US Airways!), I saw that the same man was sitting across from me. Before take-off, he took out a plastic bag from his carry-on, and removed a life vest. He put it on, adjusted the straps and sat back. Made me a lot uneasy. After the plane landed, he removed the vest, folded it precisely and returned it to its plastic bag. It was his own personal life vest. I wondered how anxious about flying you had to be to go to the effort of buying your own personal life vest. But I then had to appreciate that this man overcame his anxiety, or at least found a way through it, to get where he needed to go. And he did it quietly, making no demands of anyone other than himself.