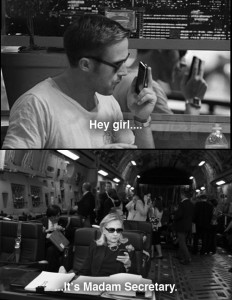 Professional development is very important to me. Some friends and fellow PR practitioners have even started an informal distribution list where we share articles and information to help keep us at our best. I myself subscribe to numerous newsletters and blogs on topics from social media to search engine optimization. So when I got Ragan’s PR Daily email “Texts from Hillary: 3 lessons for social media managers,” I opened it right away. If you are not familiar with Texts from Hillary, it is an internet meme that portrays Secretary of State Hillary Clinton as the baddest badass and coolest cat on the planet. Hillary Clinton herself joined in, even inviting the Texts with Hillary’s authors to meet with her at the State department.

But one of the “lessons” outlined was that you can either embrace the meme or fight it. “Embracing the meme might be the only way for it to go away,” wrote Kevin Allen. “When Clinton submitted her “Text from Hillary” and met with Stacy Lambe and Adam Smith, she essentially said to the world, “I get it, and I also think it’s funny—now let’s move on.”‘ I will repeat here the comment I left there: “Move on? Are you kidding? I would be trying to turn this into Hillz for Prez.” (When I just went to the site to make sure I quoted myself exactly there are five thumbs up for my comment!)

Why would any PR minded person want to move on from having the exact image you want projected to the world, put out by a third party, for free, and seen and shared by hundreds of thousands of people?

The point is moot as the authors have shut down the Tumblr account, saying the meme has gone as “as far as it can go. Is it really possible to top a submission from the Secretary herself? No. But then when you get to text with her in real life – it’s just over. At least for us. But we have no doubt it will live on with all of you on the Internet.”

Maybe the real lesson is from Stacy and Adam. Go out a winner. Like Hillz in 2016.