I do not lean toward nostalgia.  I feel absolutely no desire to revisit high school or college.  I believe in looking forward not back.  Except when it comes to Spy Magazine.  How I wish I could go back and enjoy the hilarity that was Spy.

Were you a fan of Spy?  During the early 90s, I visited Kramerbooks in Dupont Circle constantly, hoping the new issue had come out. It was faster than waiting for it to be delivered, and Kramerbooks is one of the best places in the world.

I read every bit of every issue.  I loved it.  After Spy’s demise, I loved Vanity Fair, edited by Spy founder Graydon Carter but not to the same degree.  Spy was funny.  And wicked.  And smart.  Wicked smart.

The magazine was known for its use of pejorative epithets when referring to celebrities, most of whom I had never heard of but loomed large in a Gotham kind of way,  “Abe ‘I’m Writing As Bad As I Can’ Rosenthal” and his wife the “bosomy dirty-book writer” Shirley Lord; former fat girl Diane Brill;  “the short fingered vulgarian Donald Trump; the “rat-faced, Q-tip-shaped Sarah Brightman”; the tuber-headed Bob Kerrey (or was it bulbous?)

Lots of folks refer to Spy as the Onion or the Daily Show of its time, and lament that the closest we have today are Gawker and TMZ. (I would argue that Dlisted comes close were I not so ashamed of my unrequited love for the raunch that is Michael K.)  According to founder Kurt Andersen, the magazine appeared at a time “of unchallenged celebrity reverence,” and it “necessarily proceeded to deflate that veneration with the ardor of a teenager pricking balloons at a society wedding.” 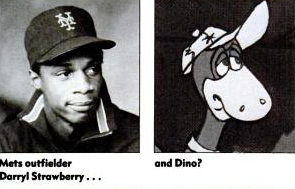 And Separated at Birth!   Where else could one see the startling resemblance between Darryl Strawberry and Dino the Dinosaur, with Strawberry referred to as the Troublesome Met and Dino as the Troublesome Pet?  Or Rudy Giuliani and Nosferatu? Or Mick Jagger and Don Knotts?? The Letters to the Editor section could have been an entire issue unto itself.  This lengthy and witty collection of correspondence included a sub-section called “Letters to the Editor of the New Yorker,” as at the time, the New Yorker refused to publish letters from readers.

Google has digitized every issue so it is now available online.  I have not gone back to re-read–yet–because I am afraid to find out you can’t go home again.  But if I do, I am going to start here, and read the article about Oprah, written just as her Chicago-based talk show was going into syndication.  More than 25 years ago, a friend of hers tells Spy reporter Bill Zehme that Oprah “dreams of being a covergirl.  She wants to be on the cover of everything.”  So Spy could also see the future.  I wonder if they had a vision of where Hillary Clinton would go when they put her on the cover in full-dominatrix wear in 1993.