Do you remember the commercial?  A pre-teen girl, after escorting her friend out the front door,  turns to her mother and completely embarrased says her friend told her she had “houseitosis.”  The mother’s response is the same look of sheer mortification.  Or how about the B52s, Party Out of Bounds? “Eeeeew. Houseitosis!”  According to Urban Dictionary, which spells it House A tosis,  it’s the condition of foul, lingering odors in one’s house. From house+(hali)tosis.

Sadly, I have it.  With a 150-pound Newfoundland and more than two feet of snow on the ground, “wet dog” has become the scent of my house.  I would much prefer the “freshly baked bread” air fresheners that my friends convinced me existed many years ago (Yes, Scott and Bill, I am STILL talking about it!) But Preston loves to sit outside on a pile of snow all day.  He comes in, melts, and, well, smells.  I burn lovely scented candles, but my rugs and furniture also smell like wet dog (yes, he lies on the couch; he thinks he is a lapdog).

Which brings me to a topic that I have been meaning to address.  I am not a fan of spray air 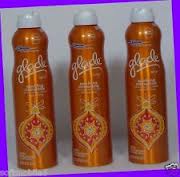 fresheners, despite the compelling advertising of the seventies.  As a rule, they are too much for me–too strong, too flowery, too masky, just too. But, Glade’s Sparkling Clementine Air Freshener, a holiday exclusively at Target, was none of those things.  The combination of orange and clove was heavenly! The scent was bright and clean and rather than hang in the air, it seemed to disperse and leave freshness in its wake.  I loved it.  I bought four or five cans (and know for a fact that there are more available on eBay).  But here’s the problem: I have associated the fragrance with Christmas.  Like candy corn after Halloween, and Cadbury Creme Eggs outside of Easter, it does not work.  Well, it DOES work, meaning it takes away the wet dog smell, but I am completely stuck by the disorienting effect the scent has on me!  It feels jarring, wrong, out of place.

I sent the dog to the groomer even though we are expecting more snow.  He smells much better, but my house does not.  Ideas?